A lot of things changed internally, and I mean….a lot….

From an infrastructure standpoint, I decided to remove the dependency on LinqToTwitter, and I replaced it with Hammock.  A couple things led me to this decision, one being the Silverlight support wasn’t as good as I’d hoped, and the streaming API implementation was limited.  After reading the Twitter documentation I realized that the REST API was super simple and I’d be better off writing a simple interface to it.

I heard good things about Hammock, so I decided to give that one a try (I wasn’t going to go as far as reimplementing OAuth).  It was pretty easy to set up and in the end I was able to get Twitter working again and with less lines of code compared to the beginning of the refactor.

I had a couple goals for this project:

What are some interest things I learned?

What is the end result of all this effort?  We have a styled Twitter app that can update your status, pull your home/mentions timeline, and most importantly will stream all subsequent tweets.  There’s no pulling and no limits.  You will get a tweet of everyone you follow in real-time as it happens.

Moreover, there’s a feature to connect to the Streaming API to search Twitter for anything.  To get an idea of what we’re talking about, here’s a full screenshot of it: 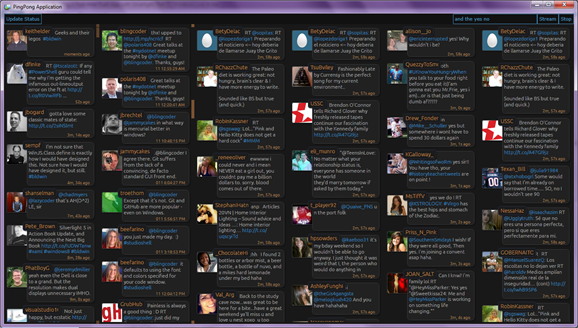 You read that right.  I’m streaming any tweet in the world that has the words ‘and’, ‘the’, ‘yes’, or ‘no’ in them.  This is streaming around 400kB/s continuously and CPU utilization is under 25%.  The tweets are coming so fast it’s impossible to read them (at a rate of 50 tweets/second), so ideally you’d want to specify realistic search terms.

Moreover, the majority of the performance cost is actually downloading all the profile images.  If I take took out pictures I could stream any tweet in the world that has the letter ‘e’ in it at under 10% CPU.  It looks like Twitter limits the rate of tweets to 50 tweets/second because that was the rate for this one as well.

Features are minimalistic.  You can update your status, but you can’t DM, you can’t RT, you can’t do any of the normal things.  My original goal was not to write another Twitter client, but it’s actually quite fun to do so, so I’ll probably eventually get all features in.

And as promised, it’s up on GitHub, and version 0.0.0.1 alpha (yes! expect bugs!!) is available in the downloads section.  Or, here’s a direct link to the XAP file on my Dropbox.  Have fun!