I have a whole series dedicated to blogging about how I wrote a Twitter client from scratch, but if I want anyone to actually use it, I better do some advertising :-D.

ping.pong is a fast and lightweight Twitter client written in Silverlight.  As of this moment it targets v4 but will likely target v5 whenever that is released.

Here are some highlights… 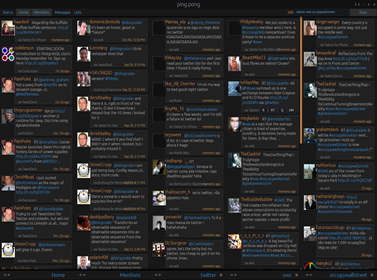 The UI is based on your typical column-based design.  The column widths will automatically resize to take up all available horizontal space.  There is no horizontal scrolling.

No more rate limits!  Your timeline is connected directly with Twitter’s streaming API, which means whenever someone you follow tweets you will know about it in almost near real-time.  Searching is also done through the streaming API.

ping.pong was built to run fast with low CPU utilization.  Even when stream searching for “e” (yes, the letter E), the CPU usage stays under 15%.  The maximum number of tweets that Twitter sends appears to be 50 per second.

ping.pong will quickly show an entire tweet conversation by navigating reply tags back to the original tweet that started it all.

The full source code for ping.pong can be found on GitHub.  You can compile it, make modifications as you please, and run it yourself.  The only thing missing is the consumer keys which uniquely identifies this client from another.  You can generate them through Twitter once you have a developer account.

The latest and greatest can be quickly installed from here.  Check back periodically for updates!